To share your memory on the wall of Elaine Strout, sign in using one of the following options:

Elaine grew up in Hudson with her 2 brothers, James and Richard Alexander and attended Bangor High School. On July 3, 1949, she married Robert “Bob” E. Strout of Bradford, where they raised 5 children and enjoyed 41 years of marriage. Bob and Elaine purchased “Strout’s Bus Service” from his parents and Elaine became the first women owner/operator school bus driver for School District 64. She was respected and loved by the many generations she carried, many called her Gram or Aunt Elaine, even if they weren’t related. On the first day of school, it was not unusual for Elaine to comfort the student or parent to let them know everything would be OK. She would give them a hug and at times, wipe a few tears (students and parents) to help get them through their first day of school.

Elaine was a very caring and compassionate woman. It was not unusual for her to buy a Christmas gift for a neighbor that had no family, or, maybe buy a meal for someone that was down on their luck. She always tried to find the best in everyone and her smile could brighten the room.

Due to Covid restrictions, there will not be a funeral service at this time. A celebration of her life will be scheduled at a later date.
Read Less

We encourage you to share your most beloved memories of Elaine here, so that the family and other loved ones can always see it. You can upload cherished photographs, or share your favorite stories, and can even comment on those shared by others.

Posted Jan 18, 2021 at 11:38am
Carolyn, I was sorry to see your Mom's passing. I pray it will bring you peace knowing she is home with her Lord. After all these years, I still remember her beautiful smile and her calm presences. May your memories be of comfort to you. Bradford was a good place to grow up , we were all surrounded by adults who cared - I guess it did "take a village" to raise you and I !!!!
Linda Garnett Cray
Comment Share
Share via:
GS

Posted Jan 04, 2021 at 02:26pm
I was very sorry to hear about Aunt Elaines passing. She was a great person who I will miss dearly. Gail Smith 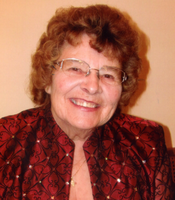