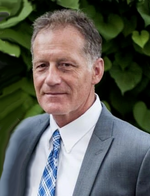 Carlton A. Strout, Jr.
Bangor
Carlton Allen Strout, Jr., passed away surrounded by his family on November 28th, 2020, after a long illness at the age of 63.

He was born on September 22nd, 1957, the eldest son of Margaret (Green) and the late Carlton Strout, Sr. He grew up in Bangor and graduated from Bangor High School in 1976. He worked at his family’s business, C.A. Strout & Sons, until 1982 when he began working for his father-in-law at Bacon Printing. Carlton took over the business in 2001 and was a well-respected businessman in the Bangor community.

He married his high school sweetheart, Judy Bacon, in 1979. His wife and best friend of 41 years, Judy was his rock; together they had three daughters, Kristan, Whitney, and Jesse.

Carlton was a proud Bangor football alumnus, two-time State Champion and captain of the 1975 State Championship team. A lifelong Ram, he could always be found on the sidelines cheering on his daughters. His post-game critique invariably was “work harder.” He had an unmatched work ethic and an intense drive that few could surpass.

Second to his love of football, was a passion for golf and fly fishing. He enjoyed his annual golf trips to Myrtle Beach and fly fishing on the Miramichi.

A competitor in everything he did, he was also a workout enthusiast. He took up running and ran road races, including a half marathon, with his daughter, Kristan.

He was also a long-time supporter of Maine hockey and could always be found in the Dexter lounge between periods.

Some of his favorite moments though were spent with his family and friends relaxing at Moosehead Lake and on family vacations in Mexico and Hawaii.

Carlton never met a dog he didn’t like, never turned down a cup of coffee with friends, and never hesitated to lend a hand. A true girl dad, he loved rom coms and impromptu dance parties. He was affectionately known as “Pac” to his three grandchildren, Wyatt and Maddie Thornton, and Anna Hayes, who would light up with his funny faces and sounds.

Carlton was preceded in death by his father, Carlton, Sr. He is survived by his mother, Margaret, and his loving wife, Judy, both of Bangor; his daughters, Kristan, of Somerville, MA, Whitney Thornton and her husband, Matt, of Scarborough; Jesse Hayes and her husband, Rob, of Scarborough; his sister Gayle Mashaw and her partner, Don, of Daytona Beach, FL; and his brothers, Ron, and his partner, Becky, of Glenburn, and Paul and his partner, Anne Johnson, of Bangor; and his three grandchildren and many wonderful in-laws, nieces and nephews.

A special thank you to his angels on earth, Alison, Steve, and Zach Hussey and Dottie George who lovingly cared for and supported him.


Finally, in honor of Carlton, we hope that you take a moment today and let a friend or family member know how much you love them. Carlton loved his family and friends fiercely, was loved by so many, and will be deeply missed.


A celebration of his life will be held at a later date when it is safe to gather.

In lieu of flowers, please consider a donation to the Cameron Stadium renovation in Carlton’s memory via https://gf.me/u/zasim5. Donations may also be sent to:
Bangor School Department, Attn: Steve Vanidestine, Athletic Director, 73 Harlow Street, Bangor, ME 04401. Please note in memory of Carlton Strout in the memo or an accompanying note.

Condolences to the family may be expressed at BrookingsSmith.com.