To share your memory on the wall of Ann Clemons, sign in using one of the following options:

Print
Ann Clemons, 84, transitioned on October 8, 2020, in Bedford, NH. She was born at home in Wakefield, Massachusetts on September 20, 1936 to Mary Butters Clemons and Maynard Gardner Clemons.

A spirited tomboy with long braids, Ann spen... Read More
Ann Clemons, 84, transitioned on October 8, 2020, in Bedford, NH. She was born at home in Wakefield, Massachusetts on September 20, 1936 to Mary Butters Clemons and Maynard Gardner Clemons.

A spirited tomboy with long braids, Ann spent afternoons with her dog Betsy, searching for frogs, turtles, and snakes. When she wasn’t in the marshes and woods, she enjoyed sailing off the waters of Marblehead with her father. The summers of her youth were spent at Hillsboro Camp, in New Hampshire, where she taught swimming, rode horses, played tennis, and developed a love for the natural world.

In 1954, Ann graduated from Wakefield Memorial High School. Her yearbook advice to underclassmen was "Study hard but have fun!" It's a motto she carried throughout her life. A big believer in education, Ann received a registered nursing (RN) degree from Mary Hitchcock's School of Nursing in Hanover, NH, and a second nursing degree from Boston University.

A spirited entrepreneur, Ann was celebrated in Maine when she invented the lobster trap coffee table - selling them throughout the United States. Later, after moving to Vero Beach, Florida, she founded “Jessica’s Cookies” and became known for her ability to produce a chocolate cookie that oozed fudge from its center. She baked cookies at night and during the day served as the director of the nursing program at Indian River Community College in Fort Pierce.

Throughout her life, Ann was known for her dry wit and joie de vivre. An exceptional violinist and banjo player, she enjoyed late nights “jamming” with friends. Ann was a happy person who lived and loved passionately.

Her spirit is ever present in her children and their children: Margaret, Gardner, Alice, William, Taylor, Nate, Parker, Jake, and Riley. She was grateful for Sean, Jon and Loida and for laughter shared with longtime friends. Ann leaves her cherished rescue dog Impy, to be loved by family.

Ann died of natural causes accelerated by an infection of the COVID-19 virus. Condolences to the family may be expressed at BrookingsSmith.com.
Read Less

Print
Services will be private for the family

We encourage you to share your most beloved memories of Ann here, so that the family and other loved ones can always see it. You can upload cherished photographs, or share your favorite stories, and can even comment on those shared by others. 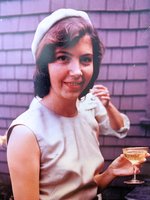