To share your memory on the wall of Ruth Emple, sign in using one of the following options:

Print
Ruth Vener Emple, a woman who was an inspiration to all and especially to her family and friends, died June 22, 2020, at a Bangor rehabilitation center after a fall at her home on June 12.

Ruth was born Dec. 9, 1919, in Amsterdam, N.Y.,... Read More
Ruth Vener Emple, a woman who was an inspiration to all and especially to her family and friends, died June 22, 2020, at a Bangor rehabilitation center after a fall at her home on June 12.

Ruth was born Dec. 9, 1919, in Amsterdam, N.Y., the eldest daughter of Lewis Vener and Ida Nathan. She grew up in Albany, N.Y., with her three siblings, Allan, Jerome and Betty. She served in the Women’s Army Auxiliary Corps at Camp Stoneman in Pittsburg, Calif., in 1943. Camp Stoneman was the largest troop staging area on the West Coast for units deploying to the Pacific Theater of Operations. After the war, Ruth moved to Brooklyn, N.Y., and it was there in 1953 when she met her future husband, Maurice Emple of Bangor, Maine, who was in New York on business. They married that year and moved to Bangor where they would raise three children, Sheila, Nancy and James.

Ruth was a larger-than-life personality and was very active in community affairs and in the lives of her children. She always worked to broaden their horizons by having them participate in sports and cultural activities. Ruth was active at the YWCA and earned the Presidential Fitness Award for swimming when she was 50. She was also instrumental in launching the first belly dancing classes at the Y after she noticed that a member of her slimnastics class had unusual grace and inquired how she developed such a talent. The woman told Ruth she was a belly dancer and the class became a reality. It proved to be very popular. Ruth also took up downhill skiing and golf in her 50s, two more activities to enjoy with her children. If that were not enough, she also encouraged her children to skate, bowl, play tennis and learn how to play musical instruments, activities they continue to enjoy.

Ruth’s advice to all was to think young and be active. It didn’t hurt that despite her 100 years, she looked no older than 70.
Her eldest child, Sheila, recalls how compassionate and insightful Mom was. “She always looked for the good in people and was very inspirational.”

In an essay about her mother in 1990, Nancy recalled that Mom was the first independent woman she had ever known. She marveled at the fact the Mom was an entrepreneur in the 1960s, making candles and jewelry. “My mother was the first feminist I had ever known,” she continued. In fact, she wrote, “My mother is the greatest woman I have ever known.”

Ruth shared a special relationship with her youngest, James. They shared a similar sense of humor and enjoyed playing off one another. They also shared a love of cooking and watching cooking shows. To Ruth, Jim was not only the son, but the sun, according to his sisters.
Ruth was a big fan of horse racing and was so happy that a New York horse won this year’s Belmont Stakes. It turned out to be the last race she would watch.
She was an advocate for proper diet and nutrition before it became a fad. She was a proponent of higher education, and advocated for the advancement of women in the political arena when most were relegated to the sidelines.

Ruth undoubtedly learned her political skills from her Aunt Rose, who served many years with the Massachusetts Democratic Party and as an alternate delegate to the Democratic National Convention from Massachusetts in 1948 and 1952. Ruth worked on Bill Cohen’s first congressional campaign in 1972 and continued to volunteer during subsequent campaigns and in his Bangor office. She also supported Olympia Snowe in a volunteer capacity on her campaigns and in her Bangor office. She was a strong supporter of Sen. Susan Collins and former Sen. George Mitchell.
Ruth remained very active into her 80s and didn’t stop driving a car until she was 92. Having lived so long in Bangor, she knew practically everybody, including most managers at every retail store in the area. All have wonderful stories to share.

Speaking of stories, Ruth could keep people entertained for hours with tales about experiences she had with celebrities, such as Kirk Douglas, Eddie Rickenbacker, Bob Cousy, Milton Berle and Buddy Hackett. In fact, Ruth shared the same birthday and hometown as Kirk Douglas, who was delivered by Ruth’s grandmother, Ethel Bailey Nathan, in 1916. Back then, Ruth knew him as Issur Danielovitch Demsky.
Ruth celebrated her 100th birthday at Bagel Central in Bangor last December with more than 100 friends. She received a special recognition from the Bangor City Council and still talked about how much fun she had seeing the people she loved so much.

Ruth is survived by her children, Sheila June Emple and son-in-law Hal Madsen of Portland, Nancy Lois Emple and son-in-law Joseph Bahr of Waterbury Center, Vermont, and James Adam Emple of Bangor.
She leaves behind many special cousins, nephews and nieces and too many close friends to name. She will certainly miss them all. The family wishes to extend special thanks to Patty Welch for her care and kindness to our mother in her final years.

A graveside service will be conducted by Rabbi Bill Siemers of Congregation Beth Israel at noon Wednesday, June 24, at the Jewish Cemetery on Severence Drive off Mount Hope Avenue in Bangor. A funeral procession will form at 11:30 a.m. at the Jewish Funeral Chapel, 118 Center St., for those who choose to participate. After the service, friends and family are invited to 60 Grant St. for a backyard gathering, featuring light refreshments, conversation and social distancing.

Those who wish to remember Ruth in a special way may make gifts in her memory to Congregation Beth Israel, 144 York St., Bangor, ME 04401, or to a charity of their choice.
A service of Brookings-Smith, Bangor
Read Less

We encourage you to share your most beloved memories of Ruth here, so that the family and other loved ones can always see it. You can upload cherished photographs, or share your favorite stories, and can even comment on those shared by others.

Posted Jun 25, 2020 at 04:14pm
To the Family: It was with the utmost sadness that I learned of Ruth's passing. She was truly a person who had an impact on those around her, her community and any organizations or groups she was affiliated with. I came to know her many, many years ago when, I believe, Jim was very much involved in the Pine Tree Coin Club. I had many varied and interesting conversations with Ruth and she was always a wealth of information. Jim was at these meetings as well. The impact both of them had upon me has always been remembered and the memories would still surface periodically. I can truly say that I thought of Ruth throughout the years. Her passing and the knowledge and drive she possessed will be sorely missed by so very many. I was disappointed that prior commitments prevented me from attending the service or backyard gathering. My sincere condolences to Jim and the entire family. Margo Boyd
Comment Share
Share via:
JD

Posted Jun 23, 2020 at 08:17pm
To The Family. I had the extreme pleasure of meeting Ruth many years ago at Miller's Rest. She was delightful. Mousy was
trying to teach me a little Hebrew then. Ruth always had some informative information to provide us. What a sweet lady.
RIP my old friend. John Moppsy Davis
Comment Share
Share via: 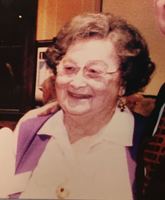