To share your memory on the wall of Brenda Smith, sign in using one of the following options:

Provide comfort for the family of Brenda Smith with a meaningful gesture of sympathy.

Brenda Faye Smith, 73, a woman of strong faith, passed peacefully May 11, 2020, at home in Lincoln surrounded by her family, her gardens, and her birds after a long battle with cancer. She was born September 5... Read More
Brenda Smith
Lincoln

Brenda Faye Smith, 73, a woman of strong faith, passed peacefully May 11, 2020, at home in Lincoln surrounded by her family, her gardens, and her birds after a long battle with cancer. She was born September 5, 1946 in Bangor, the daughter of Emerson and Rowena (Littlefield) Clendenning. She lived most of her early life in Hampden.

Brenda attended Hampden schools and following her graduation from Hampden Academy in 1964, She attended Westbrook College in Portland majoring in retail management. After graduation from Westbrook, she lived in Hawaii and managed a gift shop on Waikiki Beach. Upon her return to Maine, she married her first husband Ken Nash and they welcomed their daughter, Karen. After their divorce, she continued to live in Hampden where she met her second husband, Paul Smith of Lincoln and his daughter Rebecca. They married in November of 1986.

Brenda managed the gift shop at EMMC in Bangor and later opened her own shop in1998, Possibilities Gift and Home Decor in Lincoln. She enjoyed operating the business and providing unique products to her customers before retiring in 2012.

Brenda enjoyed the outdoors and nature. She was an avid gardener, growing several beautifully landscaped gardens at her home in Lincoln, and an avid bird enthusiast. In later years, she loved looking through milkweed for Monarch caterpillars. She brought them home and protected them and fed them while they morphed into butterflies, then set them free. She was simply amazed at the intricacies and intelligence of nature and wild things.

She was a lover of silliness, but always with a quiet ladylike poise. “My stars n garters!” was one of her catchphrases….her Nana used to say it when she was a child and it caught on with Brenda, her daughter, Karen and later with Paul’s daughter Rebecca.

We all miss her greatly, especially when we try to open her gardens and wish she was here to tell us what to do!

Brenda is survived by her husband Paul, her daughter Karen Williams and husband Wayne of Tampa, Florida, her stepdaughter Rebecca Smith of Bangor, her sister Gale Clendenning of Veazie, her brother Colby Clendenning and his wife Donna, of Lincoln, and two grandchildren and numerous nieces and nephews.

Donations in Brenda’s memory may be made to the Lincoln Memorial Library, 21 West Broadway, Lincoln, ME. 04457.

There will be a celebration of life for Brenda later this year, a time and place to be determined.

Condolences to the family may be expressed at BrookingsSmith.com.
Read Less

Print
Services will be held at a date, place and time to be announced later on.

We encourage you to share your most beloved memories of Brenda here, so that the family and other loved ones can always see it. You can upload cherished photographs, or share your favorite stories, and can even comment on those shared by others.

Posted May 22, 2020 at 03:02pm
Paul, We are are so sorry to read that Brenda passed away. Always enjoyed our chance encounters, over birds or plants! When we see the monarchs we will think of her, that was nice to include in her obituary, along with other nice things . It is no surprise to learn she cared so well for butterflies. Bob and Evie Jordan, Chester
Comment Share
Share via:
MD

Posted May 19, 2020 at 03:50pm
The Hampden Academy Class of 1964, of which “Beanie” was a part would like to express our sympathy to her family. Our class has remained in fairly close touch so when we sent her obituary notice out, we received many e mails sharing individual classmate memories of her. Fun loving, vibrant, tiny, ball of energy were oft repeated adjectives. Our class has a plaque of all our classmates who have passed away. A nameplate for Brenda will be made up and added to the plaque so that her memory will continue to live on in our hearts.

Posted May 16, 2020 at 02:25pm
In sincere sympathy in the loss of your wife. My thoughts and prayers are with you and your family. Hold close all of your wonderful memories of her.
Mary Turner
Comment Share
Share via:
SM

Posted May 15, 2020 at 03:08pm
Dear Paul, I was so saddened to read of Brenda's passing. Know my thoughts are with you and when you are able to schedule a celebration of her life, I would certainly try to attend. Upon reading about her life I came to realize what a small world it is. I knew her mom through Grace Methodist church when I was growing up, so maybe I even knew Brenda back then.... Please take care. Sue McKay
Comment Share
Share via: 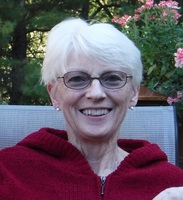