To share your memory on the wall of Donna Bedard, sign in using one of the following options:

Print
WINTERPORT - Donna Jean (Mingo) Bedard, 75, gained her angel wings on November 25, 2019, with her family by her side. Donna was born May 9, 1944, in Bangor, the daughter of Donald and Dorothy Mingo.

Donna graduated from Hampden Academy ... Read More
WINTERPORT - Donna Jean (Mingo) Bedard, 75, gained her angel wings on November 25, 2019, with her family by her side. Donna was born May 9, 1944, in Bangor, the daughter of Donald and Dorothy Mingo.

Donna graduated from Hampden Academy in 1962. She worked at New England Telephone Company for over 20 years. Donna had always been a comedian, a supporter, a lover, a friend, and most importantly, a fighter. She was a woman of many talents, including making the best peanut butter fudge you’d ever taste. Donna was a fan of country music, wood stove fires, caramel swirl frozen coffees and laughter. There would never be a summer that would pass where she was not in her camper, at the lake, surrounded by her family, friends, and her dog, Sadie. When her health started to decline, you would not find her giving up, you’d find her pushing until she turned “107-years-old”, as she’d say. She enjoyed her time with family and friends, leaving the sea of laughter and oceans of love where ever she’d go.

A celebration of Donna’s life will be held 11 -3 p.m. Saturday, December 14, 2019, at the Winterport Riverside Snowmobile Club, 30 Pine View Drive, Winterport. Those who wish to remember Donna in a special way may make gifts in her memory to the Lafayette Family Cancer Institute, c/o Northern Light Health Foundation, P.O. Box 931 Bangor, ME 04402-0931
Read Less

We encourage you to share your most beloved memories of Donna here, so that the family and other loved ones can always see it. You can upload cherished photographs, or share your favorite stories, and can even comment on those shared by others.

Plant a Tree in Memory of Donna
Plant a tree 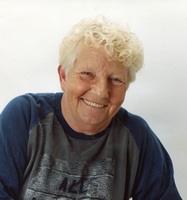