To share your memory on the wall of Robert Lounsbury, sign in using one of the following options:

Robert attended the Bradley and Old Town school system. He served in the United States Navy from 1946-1948. Robert retired from James River in 1990 after 46 ½ years of service. He was a member of the American Legion Post #84 of Orono.

Services will be private for the family.

Those wishing to remember Robert in a special way may make memorial contributions to the Animal Orphanage, P.O. Box 565 Orono, Maine 04473.

We encourage you to share your most beloved memories of Robert here, so that the family and other loved ones can always see it. You can upload cherished photographs, or share your favorite stories, and can even comment on those shared by others.

Plant a Tree in Memory of Robert
Plant a tree 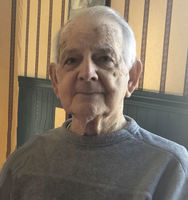