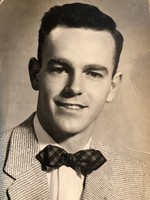 Bob grew up in Worcester, Massachusetts. He served in the Massachusetts National Guard attaining the rank of second lieutenant and then joined the Air Force attaining the rank of airman 1st class. While stationed at Dow Airbase in Bangor, he met his wife, Jackie. They had been married 61 years at the time of her passing.
Bob graduated from Fitchburg State College with a Bachelor’s Degree in Education, in 1954 and received his Master of Education degree in 1965 from the University of Maine. After a brief time as principal of a junior high school, he returned to what he loved, teaching students in the classroom. He continued teaching into his early eighties as a substitute teacher in the Bangor school system.

Robert was active in Masonry and the Order of Eastern Star. He was a member of the Sarah Orne Jewett #176 O.E.S., Chapter of South Berwick and the Tuscan Chapter #148 O.E.S., in Bangor. He served several capacities in Eastern Star as Grand Sentinel in 1978, and Worthy Grand Patron in 1980. He was also active in a number of Grand Chapter Committees. In Masonry, he was a member of St. John’s #51 A.F. & A.M. of South Berwick. Bob was also active in York Rite and Scottish Rite Masonry. He received his 50 year Service Medal in Masonry, in October of 2020. He was also a former member of the Anah Shriners.

Bob is survived by his son, Robert LaFlamme and his partner, Sheila; and his three nephews, Bud, Randy, and Chris Hall.

All who knew Bob and loved him are welcome to attend a funeral and Masonic service to be held 2:00 p.m., Thursday, April 28, 2022, at the First United Methodist Church, 703 Essex St, Bangor with Dr. Steve Smith officiating. A reception will follow from 4 to 6 p.m. at Brookings -Smith Family Reception Center, 163 Center St., Bangor. Those who wish to remember Bob in a special way may make gifts in his memory to the Alzheimer’s Association 383 US Route One, Suite 2C Scarborough, ME 04074 or at act.alz.org.