To share your memory on the wall of Claire Grindel, sign in using one of the following options:

We encourage you to share your most beloved memories of Claire here, so that the family and other loved ones can always see it. You can upload cherished photographs, or share your favorite stories, and can even comment on those shared by others.

Posted Jun 06, 2020 at 11:54am
I was a volunteer at Sonogee and I remember Claire with delight. We greeted each other with "Greetings and Hallucinations" and she would giggle always. I looked forward to our encounters and was never disappointed. She was just a lot of fun.
Boyd Z Palmer
Comment Share
Share via:
VF

Posted Jun 03, 2020 at 08:24pm
My Brother David shared a memory he had growing up in Bar harbor that when the youngest of us kids -he being the oldest of course - went to bed mom would send him down ( I forget the name of the place) to get fried clams and they would enjoy them without us- of course who the heck could afford to buy fried clams for six kids?
Comment Share
Share via:
HD

Posted May 31, 2020 at 01:54pm
I saw this photo in the obituaries and had to read it because I loved that face. I was so surprised to see it was Claire. Valarie, Frank?...hey, she was a great woman and she impressed me. I saw her art at Sonogee and it was top of the heap. She had a great life and didn't waste a minute of it. Helen Douglas
Comment Share
Share via:
VF

Thank you so much Helen, that means a lot to me. Valerie
NS

Posted May 30, 2020 at 11:09am
Our sympathy to Clair's family. We only knew her in the last few years of her life when she was still living at her home. We had a good time, and enjoyed the shared adventures with her.
Nancy Spooner and Jane Balaam
Comment Share
Share via:
VF

Thank you Helen, that means a lot to me. Valerie
VF 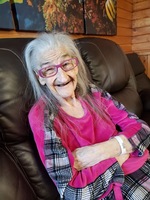 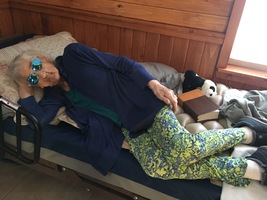 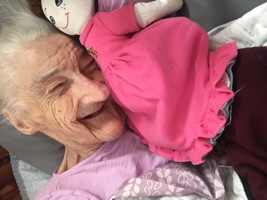