To share your memory on the wall of Raymond Cormier, sign in using one of the following options:

Provide comfort for the family of Raymond Cormier with a meaningful gesture of sympathy.

Raymond “Ray” Joseph Cormier, was deeply loved by Mary Lou, his wife of sixty years; dearly by his daughter, Alison and partner, Tom Perkins; tenderly by his son, Michael and wife Tammy; and forever by his grandsons Cameron and Cody and fiancé, Mindy, and granddaughter, Maddison. He passed away March 7, 2020.

He was born in Bangor on March 1, 1934, one of nine children, to Leo P and Laura (Depres) Cormier. After graduating from John Bapst High School, Ray enlisted in the US Navy and served as a steel worker 3C in Construction battalions (Seabees) on several Pacific Islands. He was exceptionally proud of his service to our country.

Upon discharge, he returned to Bangor, and married Mary Lou Cox in 1960. He worked for his father as a sheet metal mechanic at the Bangor Roofing and Sheet Metal Company until 1967, when he bought the Bangor Radiator Shop from his father, Leo. Ray and son, Michael, worked together and carried on the family business until Ray’s retirement in 1996 when Michael bought the business, making it the third generation of family ownership. The fourth generation was added when grandson, Cody, opened an automotive business in Portland, celebrating Bangor Radiator Shop’s 90th year of service to its customers.

In his younger years, Ray enjoyed roller skating at Lucky’s Landing, but also enjoyed hunting, fishing, playing cribbage, telling stories and camp life. He especially loved sailing the waters of Penobscot Bay with his family and friends.
People who knew Ray, knew he was very generous with his talents and material things. He was a member of the Bangor Breakfast Rotary Club, the Brewer Kiwanis Club, the Mainly Music Barbershop Chorus in Bangor, and the Bagaduce Ambulance Corps of Castine.

Ray is survived by his wife Mary Lou, daughter, Alison and partner, Tom Perkins, son Michael and wife, Tammy, grandchildren, Cameron, Cody and Maddison, brother, Robert, and sisters Florine and Shirley and their spouses and children.

He was predeceased by his parents, brothers, Edward, Gerald and Alfred, and two sisters, Lorraine and Theodora.
Ray’s family wishes to thank the Veteran’s Administration of Augusta and Bangor and St Joseph’s Hospital staff for their excellent care, and many kindnesses toward him.

A Funeral Mass will be held 11 am Wednesday, March 11, 2020 at St. Paul the Apostle Parish, St. Mary’s Catholic Church, Ohio St., Bangor. The family invites relatives and friends to a luncheon to celebrate Ray’s life in the parish hall, immediately following the Mass.

Gifts in his memory may be sent to St. Andre Home,( its mission is to serve young women, babies and families in need,) 168 Prospect St., Biddeford, ME. 04005.

Condolences to the family may be expressed at BrookingsSmith.com.
Read Less

We encourage you to share your most beloved memories of Raymond here, so that the family and other loved ones can always see it. You can upload cherished photographs, or share your favorite stories, and can even comment on those shared by others.

Posted Mar 13, 2020 at 08:33am
Dear Dr. Cormier, Alison, Mike and family
Please accept my condolences on the passing of Ray.
He reached out to me a year or so ago on Facebook with a hello and that really made my day. His gesture was in sync with the Mr. Cormier I remember from 40 years ago growing up.
I will always remember Mr. Cormier from my childhood days on Longmeadow Drive with his friendly smile and positive attitude. He will be missed by his neighbors, including my Dad, and this FB friend. Rest in Peace, Mr. Cormier. Thinking of you all.
David
Comment Share
Share via:
JS

Posted Mar 10, 2020 at 02:22pm
After reading of Rays Passing, I was at a seminar and came across this note that I found most fitting for Ray, so I share it here for the family and friends: "Your Song Has Ended, ....But Your Melody Lives On!" Ray was most proud of his family, particularly his grandsons who he talked about quite a lot. Rest Easy Ray, your melody continues in your family and many friends.
Comment Share
Share via:
JL

Posted Mar 09, 2020 at 10:20pm
Dear Cormier Family. I just saw that Ray has passed and my heart breaks for you. He was such a inspiration in my life, and such a blessing. I will be praying for you all. Much love. Jim Lord
Comment Share
Share via:
JS

Posted Mar 09, 2020 at 11:37am
Ray is the kind of guy who appreciated the world around him and got out and enjoyed this. He was a great friend and neighbor. He will be sorely missed

Posted Mar 09, 2020 at 11:03am
Ray was always a great friend. We had a lot of fun together on the Backshore road. When I built his wineglass sherry rowing boat he was helpful in that process as we. Vickie and I will miss him a lot. Our heartfelt condolences to Mary Lou and the family. Jim and Vickie Sheridan
Comment Share
Share via: 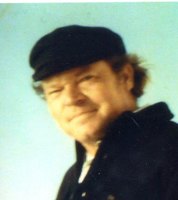 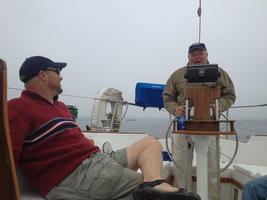 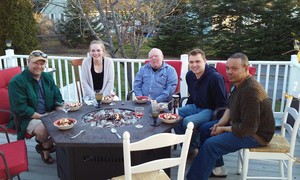 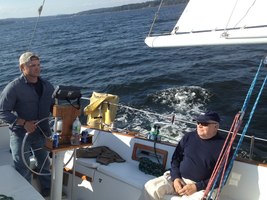