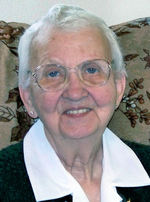 Shirley M. (Smith) Clark, 89, loving wife of the late Elden V. Clark Sr. passed away September 4, 2019, peacefully into the arms of the lord at her daughters home surrounded by her loving family. She was born February 26, 1930, in Bradford, the daughter of the late Helen (Skinner) and Lewis Smith.

Shirley graduated from East Corinth Academy in 1948. She married Elden Clark on December 11, 1948, and they made their home in Corinth for over 60 years until moving to Bangor in 2013. In 2018 she moved back to Corinth to be with her daughter Elaine. Shirley had a special relationship with her daughter as she would always say “She’s my one and only”. She enjoyed her last days with her and her family and all those who came to visit. She worked in local shoe factories and made many special friends. She enjoyed working in her flower gardens with her husband, and loved her climbing rose bush that her husband cared for.

Baking was such a passion for her, she was known as the “cookie lady” everywhere she went from children to adults everyone loved Shirley’s cookies. Her love for her family would warm your heart, they were all special in every way. Her great grandchildren could make her smile just by walking in the room. She so enjoyed all the quick stops they would make and all the hugs and kisses. She was a lady with great faith in the Lord, and in the power of prayer. Shirley was a proud member of the Corinth Baptist Church. She will be deeply missed by family and many dear friends, who she gave a good night call to say “Nighty, night, love you”.

A funeral service will be held 2:30 PM, Monday, September 9, 2019, at Brookings-Smith, 133 Center Street, with Pastor Danny Linville, pastor of the Corinth Baptist Church, officiating. Relatives and friends are invited to call from 1:00 PM until the time of the service. Interment will be at the Corinthian Cemetery, Corinth, immediately following the service. Those who wish to remember Shirley in a special way may make gifts in her memory to the Corinth Baptist Church, 331 Main Street, Corinth, ME 04427. Condolences to the family may be expressed at BrookingsSmith.com.

“Our Dad called our Mom his Angel, he now has his angel in his arms again, to help watch and guide us as we try to go on without them”.

This obituary is protected by copyright by Bangor. Proudly Serving the Communities of Bangor, Brewer, Orono, Hampden, and surrounding areas . Bangor is located in the state of Maine, United States.