We're sorry but the candle you have selected is currenty in the process of being purchased or has just recently been purchased.

Please feel free to select another candle or check back in 15 minutes to see if the candle you have selected has been released for purchase.

We're sorry but there are no candles available for lighting.

You have already begun a candle purchase session. If you would like to continue with your current candle choice please click "Continue" otherwise please click "Select Another".

In Memory of
Louise E. (Nickerson) Grant Villeneuve
1926 - 2018
Click above to light a memorial candle.

The lighting of a Memorial Candle not only provides a gesture of sympathy and support to the immediate family during their time of need but also provides the gift of extending the Book of Memories for future generations.

In the event that there is an error
in the information presented,
please contact the funeral
home by clicking here. 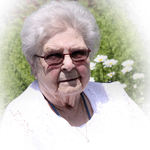 YARMOUTH and BANGOR – Louise E. (Nickerson) Grant Villeneuve, 91, died July 27, 2018 at a Yarmouth healthcare center. She was born Sept 18, 1926, in Hampden, the daughter of Roger and Vivian (Emerson) Nickerson. Louise attended Hampden Schools. She was employed in the lunch program of the Bangor Schools at Dow Lane, Fourteenth Street and Mary Snow Schools. Louise was married to Creighton G. Grant on March 21, 1945 until his passing in December 1987. She was then married to Vernon Villeneuve in September 1992 until his passing in May 2011.Louise was a member of Columbia Street Baptist Church, where she also taught Sunday school. Her favorite scripture was II Timothy 2:15: “Study to shew thyself approved unto God, a workman that needeth not to be ashamed, rightly dividing the word of truth”. She was also member of the Millwee Chapter No. 198 of the Order of the Eastern Star of Orrington. She enjoyed camping, water and oil painting. Surviving are her children, Judy Grant Harlow and her husband, Lloyd of Rosemount, MN, Carolyn Grant Tracy of Pinehurst, NC, Richard Grant and his wife, Gloria of Yuba City, CA, and Stephen Grant and his wife, Susan of Freeport, ME;; six grandchildren; six great-grandchildren, brothers, Melville Nickerson of Newburgh and Robert Nickerson of Virginia; many nieces, nephews, and extended family. Louise was predeceased by her brother, James Nickerson, sister, Shirley Howard and son-in-law, Robert Tracy. A graveside service will be held 11 am, Friday, August 3, 2018 at Maple Grove Cemetery, Pushaw Road, Bangor with the Rev. Dr. Stan Moody, pastor of the Columbia Street Baptist Church officiating. The family invites relatives and friends to share conversation and refreshments at the Family Reception Center of Brookings-Smith, 163 Center Street, Bangor, immediately following the graveside service Friday. Condolences to the family may be expressed at BrookingsSmith.com.
Order Flowers

This Book of Memories brings those affected by loss together by encouraging communication and self-expression. By giving friends and family a special place to tell their stories and express their feelings of loss, it helps them care for one another during a very difficult time. Click on any of the links to the right to access features or information within this memorial website.